How to Use Technology with Intention

Journalist P. Ramakrishnan talks to former video-game exec and founder of Infinite Screen Time, Arcadia Kim, about navigating the minefield of “mindful scrolling” and how she is teaching families to purposefully integrate screen time into their lives.
30 Mar 2022
Words by: P. Ramakrishnan

Education and entertainment, news and information, pressure and pleasure – all things that lay at our fingertips… but do they instead need to be at arm’s length? Arcadia Kim, founder of Infinite Screen Time has an aim to model, mould and teach screen time awareness as a generation of children (and adults) are struggling to cope with what is happening offline by attempting to find sanctuary online.

As the former COO of video-game developer and publisher Electronic Arts, Kim knows firsthand how gadgets are created to get you hooked and addicted, but the Wellesley College and Harvard Business School graduate has pivoted from fearing time spent onscreen to instead making it an essential tool for developing responsibility in children. Kim talks us through her revelations and method, and how parents can use technology with intention. 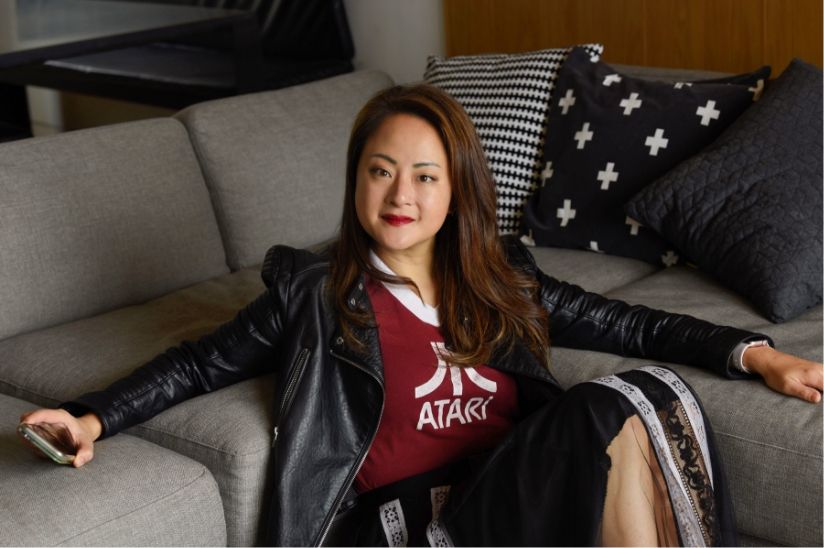 “Screen time, itself, is a myth. It is a huge disservice to lump connection, creativity, learning, work, entertainment and play all into ‘screen time’. We need to reposition screen time as a normal part of everyday life because it has changed the way that we do everything.”

Gen Z is perpetually glued to the screen, and we – the generation told not to sit too close to the TV monitor – have been taught that this isn’t ideal. What are the myths you’d like to dispel about screen time, from your empirical experience?
Parenting transforms you. Being a parent inherently means having to prepare your children for their future with only the tools of the past. As a generation who was yelled at for watching the television too closely and are now tethered to our screen time at close range, we have the unique responsibility to raise a generation who can wield this technology for good. Screen time, itself, is a myth. It is a huge disservice to lump connection, creativity, learning, work, entertainment and play all into “screen time”. We need to reposition screen time as a normal part of everyday life because it has changed the way that we do everything.

What do we know now about the evil that no longer rings true, based on studies and evidence?
Like everything, moderation is key for productivity and enjoyment. Screen time has been debated vigorously both for good and for bad in the media, largely because we haven’t developed the right tools on how to utilise it. We can debate the pros and cons of screen time without coming to a clear conclusion as parents. And the truth is, technology is here to stay; and rather than fight this terrible tide of screen time, it’s important we come up with a strategy on how to surf it.

Helicopter parenting is one way that people end up managing screen time for children. What anxiety would you like to help abate?
Parents need to be involved in their kid’s technology life by becoming advocates, models and reflectors of good screen time practice. I tell my clients that if their family’s screen time rules require monitoring your kid’s smartphone as if you are Tom Cruise in Minority Report, your kid will become like Tom Cruise in Mission Impossible to get around your rules. I love Anya Kamenetz’s (author of The Art of Screen Time: How Your Family Can Balance Digital Media and Real Life) perspective on screen time: “Be like a soccer parent, but for Minecraft.” Meaning, be supportive, encouraging and involved. 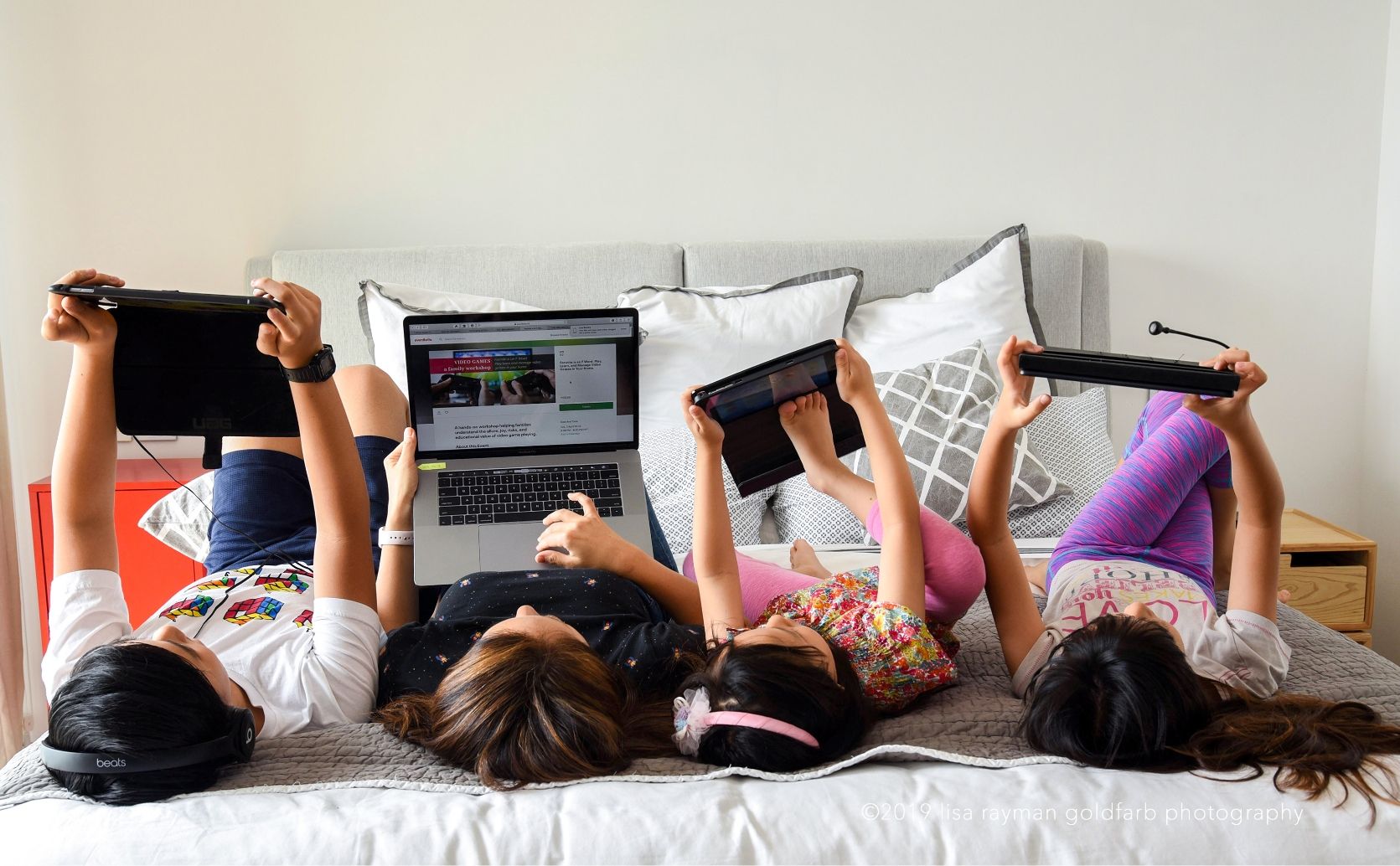 Arcadia with her kids

Let’s roll back to how it all began. What made you want to launch Infinite Screen Time?
My journey to Infinite Screen Time is marked by shame, fear and then eventual triumph. Five years ago, I found myself crying on the bathroom floor over summer vacation in Los Angeles because my then 10-year-old son had thrown an iPad at my head!

While the initial impact was shocking, the moment after was my wake-up call. I realised that I was failing miserably at managing my kids’ screen time, which was ironic given that I am the former Chief Operating Officer of Electronic Arts Los Angeles. While I had the privilege of working with some of the video game greats – The Sims, Lord of the Rings, Command and Conquer and Medal of Honor – I was not prepared for the challenge of parenting in the digital age. The first year of my son’s birth, the iPhone was released, and this portable weapon of mass distraction was like a tsunami impacting my family’s everyday life. The American Academy of Pediatrics told us that more than 30 minutes of screen time per week during childcare could rot a child’s brain and to never allow any screen time before age two. They said this stuff was addictive. And as the ex-COO of a major video-game company, I knew first-hand what it took to make this stuff – it was made to hook you!

How did knowing that about video games affect your parenting style?
My kids were allowed 20 minutes a day, and not a second more. It was all about task lists, stopwatches and terror. During that time, my kids had a nickname for me: Darth Mom. My kids hated me, and screen time was becoming my monster. By being dictatorial about my tech, I realised I was sending the wrong message. I was saying, “Watch it, kid! Screen time is dangerous! It’s powerful, bad and you can’t control it.”

So, I decided to experiment with a different strategy. Rather than start with the rules, I told my son and his sisters they were allowed unlimited screen time, as long as they kept to their schedules and commitments. What happened next was interesting. With the power of screen time faded, we all needed it much less. Once the rules disappeared, we all became more relaxed around the technology.

Now, I’m not saying that every day was perfect, but we were screen timing together out in the open. We started talking about what we were seeing, doing, and most importantly, feeling on our screens. We were connecting as a family around the screen time. We were using technology with intention, and became aware of its effects on our choices. Since that “A-ha!” moment, I’ve been on this mission to help families parent around technology in this new and more evolved way.

What have you personally learned that you didn’t know before while working on this initiative?
Working with such diverse families here in Hong Kong, I realised that healthy screen time comes from analyzing the why, when and where of technology, and how it plays into everyday life. So much about technology use is based upon what we value as individuals, families and children. Screen-time rules are not a one-size-fits-all. They should be as diverse and unique as the families who embody it. 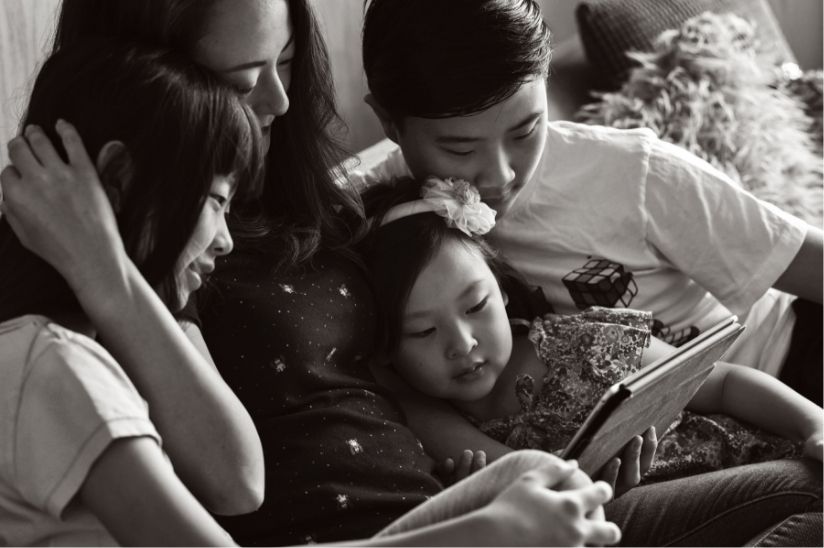 For your own well-being, what have you found online that has helped you immeasurably?
Not surprisingly, the online resources and apps that have helped me with my inner peace, leisure and wisdom are ones that enable more connection IRL (In Real Life):

I use a wonderful meditation and prayer app called Abide. It will guide you through daily study and affirmations, and helps me unwind the day for rest.
A new feature that I appreciate on the Apple iOS is the Focus feature. You can set up your devices for different modes of life like, “Mindfulness,” “Work” and “Do Not Disturb” by defining different levels of notifications and alerts.
By customising your technology to work for you, you are in control. My favourite online service over the pandemic has been Zoom. We just hosted a Zoom party for my parents’ 50th wedding anniversary! It was so much fun sharing pictures, doing scavenger hunts, and laughing and reminiscing about their wonderful life when the whole family couldn’t be physically together.
For fun, I have recently begun playing The Sims with my girls. It’s been so interesting to see the choices that my daughters make in their virtual world when playing this iconic game.

Even in education, there is as much misinformation as there is knowledge online. How does a parent filter out bad advice?
Focus on the choices your child makes throughout the day. It’s important to start from an early age, empowering kids to have agency in what they do on their screen.

Ask questions like, “Why do you like this YouTube star and not that one?” Kids need to learn how to be their own screen curators by making positive choices of their content, apps and games. One online tool that I recommend parents and kids to use together is Common Sense Media.

Common Sense Media (CSM) is an organisation that reviews and provides ratings for media and technology with the goal of providing information on their suitability for children. Before my kids ask me permission to download an app, I always ask them, “Did you Common Sense it?” If they come back with a rating that is out of their age range, they know it may not be allowed. By giving them this agency, they are arming themselves with their own filters. 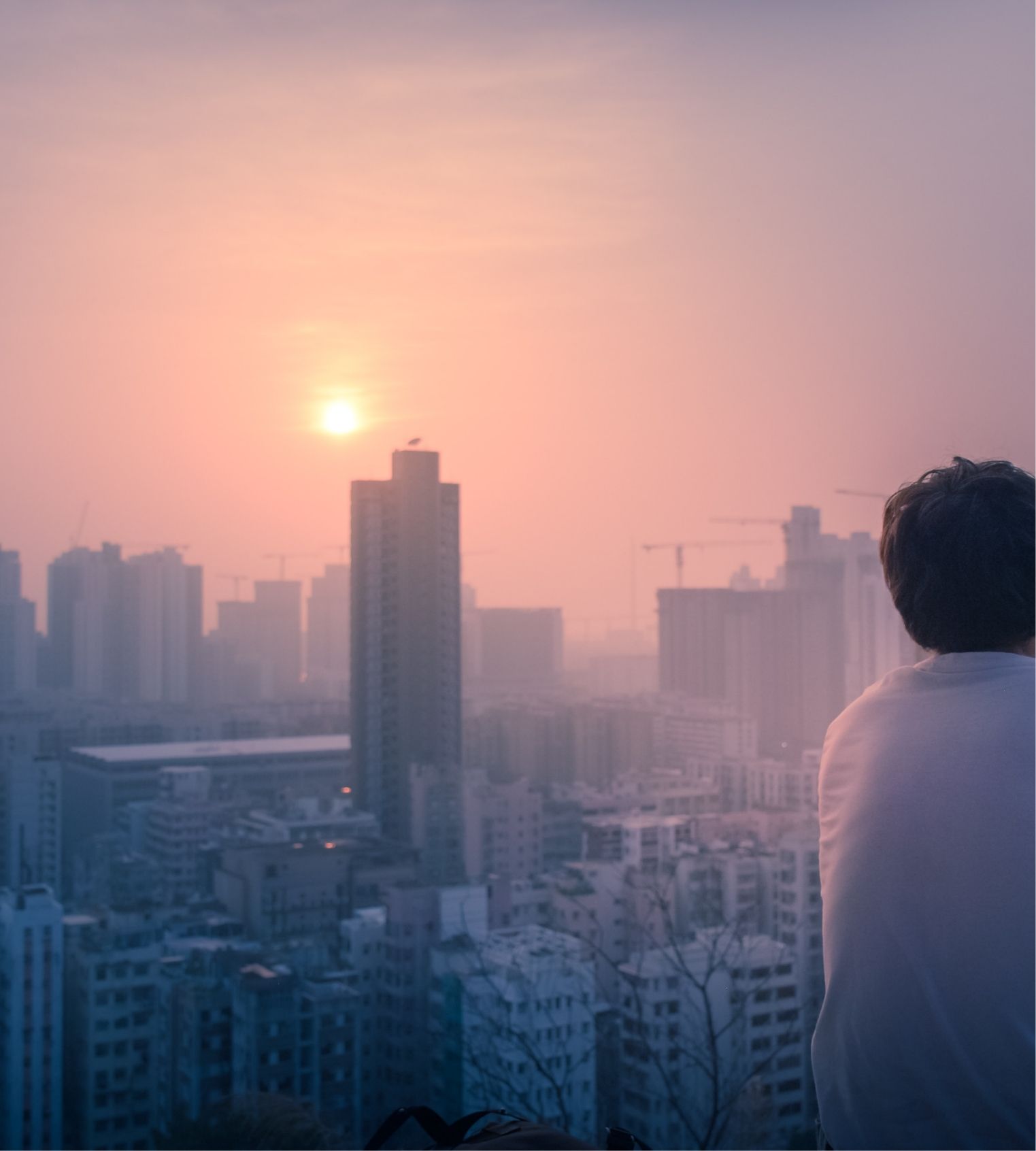 It doesn’t look like the pandemic is going to abate in the coming year – how do we adapt to the new normal in a healthy, conscientious way?
Because of the constantly changing pandemic rules that families are experiencing (lockdown or not, online or not, etc), it’s best to keep the rules as simple and as flexible as possible.

Right now, we have this simple rule of getting outside at least once a day. Soaking up the sun has so many health benefits, and helps us see the larger perspective of this pandemic. We also talk daily about our technology life. We love sharing our accomplishments and goals that we have experienced online. When community or school rules shift, we reset some of the rules to make sure we’re taking advantage of everything that is available to us.

I wonder now if it’s time to turn the tables. It isn’t just kids, but adults – parents – who should be aware of mindful screen time to benefit their lives as well.
Absolutely! Many of us were not raised with screens in the way that is presented to us today. Mindful screen time is the critical skill of the 21st century. It is a way of connecting our emotions with our screens. It’s about using technology with intention. It’s about being aware of who we want to be online and for the world. I know for many parents the challenge of raising digital natives has shone a harsh light on ourselves. For this reason, while the opportunity for technology is with our kids, the challenge starts with parents.

What do you hope for in the coming year?
I hope to connect more with more people personally and professionally about their stories and journey with screen time. Infinite Screen Time seeks to build a community of parents, coaches and educators to work together to create a new narrative around screen time for kids. I want to remove the shame, strife and fear around technology, and replace it with connection, joy and passion. Our kids are ready to take their love for screen time to the next level. I’m hoping that we can all catch up with them!

It is my personal methodology that helps families analyse their screen time habits. I also have a Facebook group where you can ask any questions about screen time. There’s a community of technologists, coaches and educators to help you navigate technology for your kids. I also have Instagram, LinkedIn and Twitter accounts where I provide regular tips, strategies and opportunities to take my future courses. 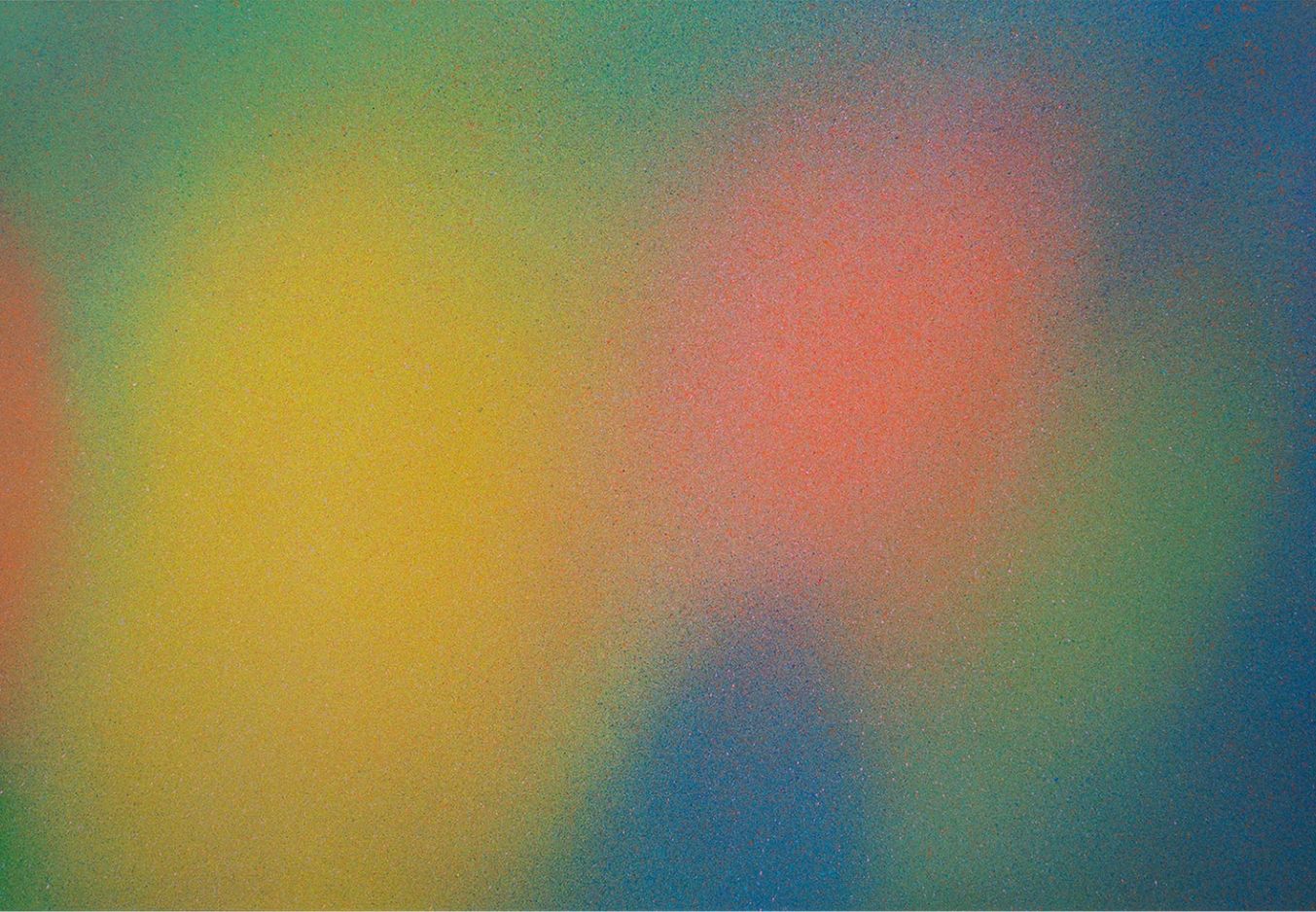 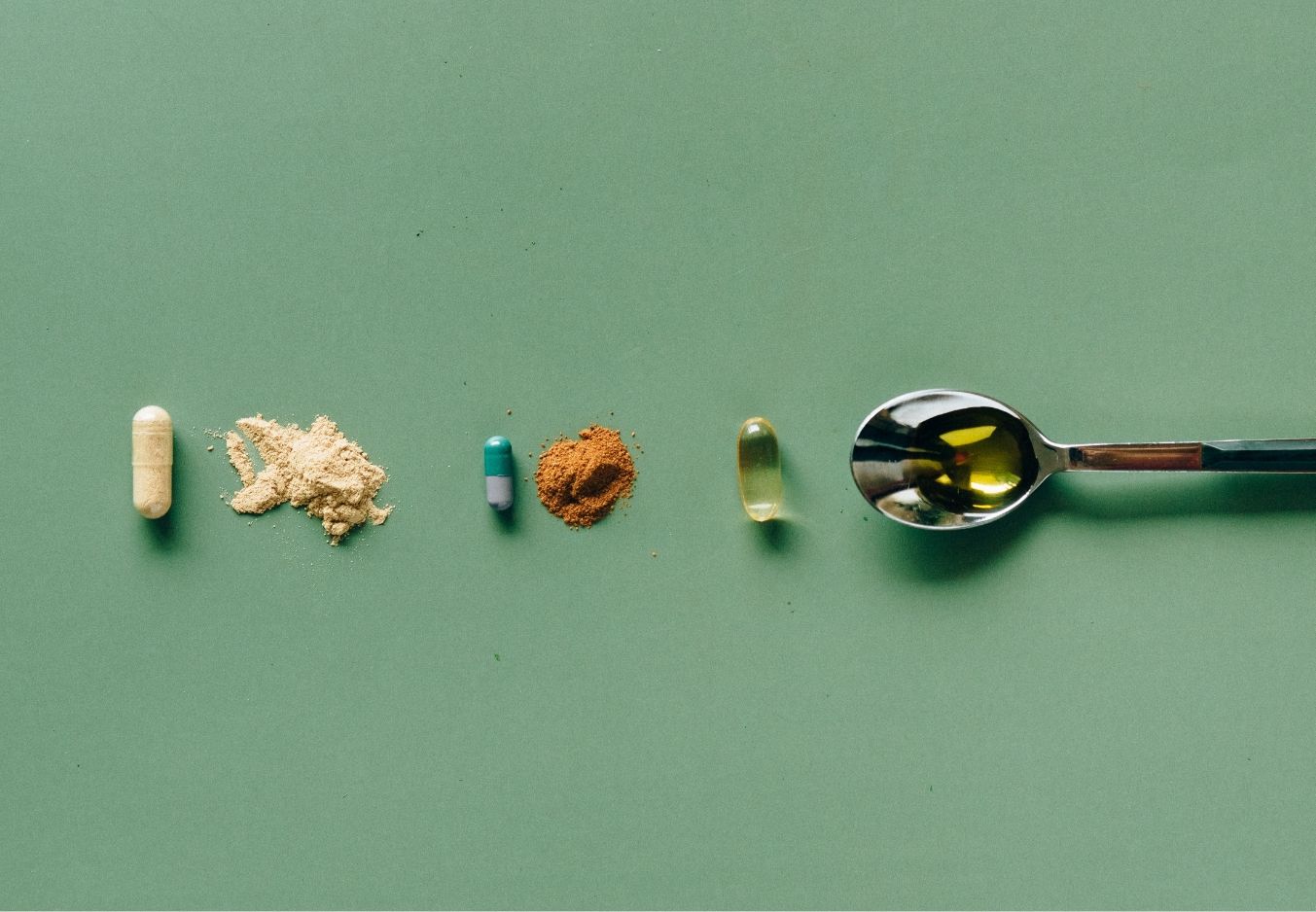